Start a Wiki
Harry Scorin is a human male character played by the user known as Harry Scorin. He is often called by just his last name, Scorin, as well as familiarly referred to as Prince, and once masqueraded under the pseudonym, King Leathal. He practices Saradominism devoutly and is a member of That Saradomin Group. He also is a White Knight Captain. He is 6'1 with a burley and strong look, but is very smart. He has a brown mutton and a combover haircut.

Scorin first appeared in the realm of roleplay in 2009 at the age of 15. He came from his home land of Kinshra. Roaming between Lumbridge, Falador and Varrock, he learned a lot about the world and how to be a gentle soul. He was taught about the gods by a priest and fell in love with Saradomin.

One year, Scorin's wandering around the world led him to stumble upon Karamja and Al Kharid. He took a liking to watching the distant island of Entrana. At the age of 19, he joined the university and studied the History of Gielinor. He also took a special class by a monk who taught him about Saradomin. Once on Karamja he met a man, he taught the man all he had learned. Then the man,who turned out to be a rich merchant, thanked Harry by giving him a Holy Blade, now identified as from the Wushakno Isles. Quote: "Harry Scorin, you are destand to greatness use the blade wisely." Harry does not fight with this blade, but uses it during ceremonies. It is one of the only blades of its kind in the western lands.

Shortly after, Scorin assembled for the first time a brotherhood of clansmen, self-named Leathal Forever. He briefly took the pseudonym "King Leathal." He spent many months not living in the University, but made regular visits. The Leathal Forever brotherhood disbanded towards the end of this year and Scorin went into mourning over his failure. He went to live at the Edgeville monastery for three months.

Lords of Saradomin, Sara Nation, and That Saradomin Group. (2012)

Scorin left the monastery in the first month of the year and met a man who called himself "Maetstro" (but was soon nicknamed Mae). Shortly after, he joined a congregation known as "The Lords of Saradomin" and quickly rose through the ranks. That summer, the Lords recognized him as their leader, an overseer. He mostly managed upkeep and defenses. University visits were scarce. In the autumn, a fight with Mae and misunderstanding spurred Scorin to mutiny from the Lords and form a splinter group known as "The Saradomin Nation," and eased his mind by studying lumberer's craft. In 5 days, his army had recruited hundreds of members. Soon, Mae and Scorin mended their wounds and he returned to the Lords of Saradomin, but the congregation was never the same. Many of the brothers and sisters Scorin had known and loved had moved on and been replaced by strange new faces in this time that Scorin was away with his Saradomin Nation. The Lords soon fell from strength and their presence in Varrock and Falador faded to nothing, thanks to a spy on the inner counsil. He is still friends with Mae to this day. Scorin went back to the University for half a year and was put on to the elder counsel, after graduation for his studies of Saradomin. He desperatly serched for another congregation of which he could be a part. In the last month of the year, he joined the Holy Crusade and, on a mission, he met Lord Dion Magnan.

In the first few days, Scorin left the holy crusade and joined That Saradomin Group (he has aquired suspicions that the Holy Crusades' leader is a Zamorakian spy). He fought under Lord Dion Magnan for a long time. During this time, a family member died. Scorin then left That Saradomin Group to meet with monarchy ruling Falador to discuss this matter and found himself joining the White Knights, this is when he was given the title Prince, rumor is there was more going on then just joining the White Knights. He was made Captain of the guards, and is seen to this day guarding the castle and restricting those who come in and out, he has arrested and caught many Zamorakians in the act of trying to ruin the castle. He returned to Lord Dion and fought for him for a short time, but soon left for matters unkown. He rejoined Dion Magnan one week later. During his absence he attempted to arrest a man who was an assassin, named Vincent, and he was on Scorin's tale. On a raid of the Kinshra Base the assassin showed his true colors as a Zamorakian General, and Lord Dion Magnan with the help of Sander Stoneman killed him. One day, on a visit to canfis, he met a man who was doing a silver run. Harry escorted him as far as possible and they talked about how vampires must be stopped. When they reached the end of the road, the man handed him a Silver Sickle and welcomed Harry into the Myreque. Harry also has the only trimmed That Saradomin Group cape to exist. During a fight with a Zamorakian High Priest, Sythe Blaster , Harry lost his left hand.

During a fight with a Zamorakian high priest, Sythe Blaster, Harry lost his left hand. In the last two days he has fought with High Priests of Zamorak, one of which is Sythe, and Zaors. He is worried about the new age briging new evil powers, and is making percautions. Everyday a fight breaks out and Harry is on the scene to fight the evil doers. He is seen spreading the word that Zamorakians are becoming more radical, and to be wary. Sythe Blaster is his biggest rival and they meet in combat everyday. Harry has recently taken a suspicion about Lord Arkonos, that he is a Zamorakian lord. Harry wishes that Falador and all of Asgarnia are sealed off to people and creatures of other gods so we may prepare for the wars. Recenly Harry met a Saradomin High Priest, and is currently taking lessons from him, to improve his skills for the new age. 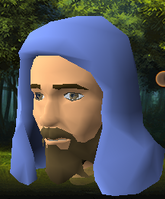 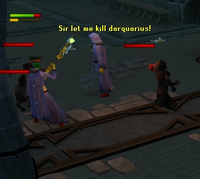 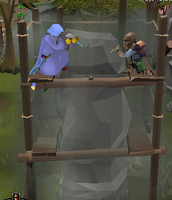 Harry building a statue of Saradomin.

Harry fighting werewolves in Canfis, in the name of Saradomin. 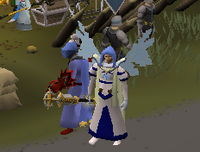 Harry and another Order member after a fight.

Harry and his pet skypouncer Arc

Harry fighting with a Zaros Priest.

Harry having a fight with members of orders from Bandos, Guthix, and Zaros.

Harry yelling at Arkonos and other men about Arkonos' Tyranny 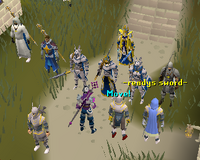 Harry and a white knight commander facing a blockade. (harry is the one yelling move)) 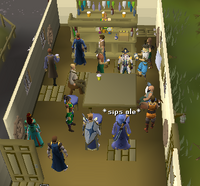 Harry at a charity event.

Harry and a high Saradomin Priest.

Harry talking to other clans in falador. 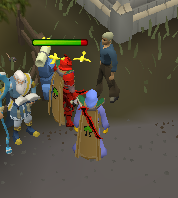 Enjoying a drink with clan mates.
Add a photo to this gallery
Retrieved from "https://rsroleplay.fandom.com/wiki/Harry_Scorin?oldid=149377"
Community content is available under CC-BY-SA unless otherwise noted.