My kin, the pureblood of Freneskrae.

My father, and far stronger than I. His family means a lot to him, and thus to me. He's spent a long time working at the Academy of Heroes, which seems to mean a lot to him as well. I can't help but think there's better things to do with one's time than just look after a school, but it's his wish, so be it.

My mother, and most certainly my superior, though not that I'd let her know it. She enjoys having her army of constructs, and she tends to spy on me, the latter of which gets on my nerve at times. I know she means for the best, but she doesn't do it in a way I'd prefer.

A mahjarrat of unknown alignment, though it seems possible she is Zarosian. She seems to be creating herself an army of demons, somehow. I should to either join her, or stop her encroaching on my things. I won't be able to beat her alone if I try, though.

She's willing to trade notes with me, an interesting prospect. My studies on divining aren't particularly unique, though I'm not sure if I could tell her about the skeleton. There's still work to be done.

She's hurt at the moment, physically and emotionally. I honestly hope she recovers from the loss of her Sparrow.

A whore, plain and simple. He's apparently Zarosian, and recreated lightning magic, but I really cannot be bothered with his attempts to mate with me. Besides, his alias is the most obvious thing... he seems to think that it would double bluff people into thinking it's too obvious to be a false name. Regardless, he is of no use to me, for now.

Seems powerful, and has spider demon cronies. He pretty much ran the show at the Ritual, though I don't know who he follows. Could be worth looking into.

A strange race of shapeshifters; purebloods and mongrels.

The first friend I had, and dead. I might get around to writing about her in detail, but there are more important things to attend to.

A teacher at the Academy, and one whose secret I know (though Kharille Minerva seems intent on spreading it). I don't entirely trust her, nor her allegiance to Kharille Minerva.

I've found another weakness, which should be useful in a situation where I am forced to fight her.

She's open to a shared holding, but I'm unsure if I would be happy working with House Azazel so closely.

A Zarosian, fallen icyene. I know little of him, but he seems fervent in his support of Zaros.

He also seems rather dull. An exploitable trait.

The most prosperous race on Gielinor, debatably. Also most prone to crossbreeding.

My spy, an adept and flexible climber. I've heard her speak only once twice, and she seems to be against killing. It's unlikely that she'll have to get involved with killing, but I'd best keep it in mind.

It hurts to think about, so I'll make this quick. I saw a skeleton, a large gemstone embedded in its head, armoured in some strange metals. I got a nosebleed whilst drawing a sketch, the pain was so intense at that point. I don't know how that thing came about, but it's worrying to think that something could come about such as this. I'll see about doing some research on this.

As far as I can tell, the helmet of the undead has a gem of some kind in it. Research is being hindered by the fact it hurts to think about. What is it?

A thought; what if the skeleton was placed into my mind as storage? It makes no sense that it would be me, but it would at least explain the pain to an extent. 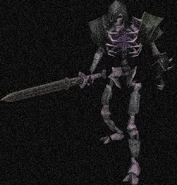 The Skeleton
Add a photo to this gallery
Retrieved from "https://rsroleplay.fandom.com/wiki/Halcyone_Khaleesi/Notebook?oldid=153377"
Community content is available under CC-BY-SA unless otherwise noted.