The Guild of Heroes is located on the eastern side of Al Kharid, and backs onto The River Salve. The Guild is an extension of The Heroes' Guild. It accommodates facilities for aspiring heroes to obtain the skills required, along with more frequent questing opportunities, to assist them on their road to becoming a hero.

After being dubbed a hero, the former students are invited to become a member of the guild. If they accept, they will be able to continue their accommodation inside the guild. They will be able to progress their skills, increase their renown, become more recognised throughout Gielinor, and eventually become a legend.

After becoming a legend, former heroes are invited to join the Legends Guild, and are eligible to become Guildmaster of the Guild of Heroes. 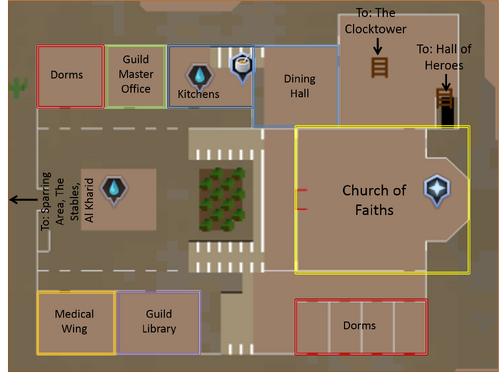 The Church of Faiths is a multi-faith church, constructed to reinforce the guild's religion policy. The policy states that members are allowed to follow whichever religion they wish, but they must do this discreetly in order to avoid conflict or offence.

It is forbidden to be disrespectful inside the Church of Faiths, as is the wielding of any weapon.

At the easternmost part of the church are a series of guilded mahogany symbols, each one representing every known god in Gielinor.

The Hall of Heroes is a chamber devoted to celebrating the noteworthy heroes of Gielinor, and concreting their existence for all eternity.

When a guild member obtains 1,600 Renown Points, they will have their name added to the Book of Heroes: a tome containing the names of all heroes that have achieved this amount of Renown Points, and thus considered worthy to be remembered in this method.

When a guild member obtains 3,200 Renown Points, they will have their portrait hung inside the hall. The hero's name will be enscribed on a plaque, and hung below their portrait.

When a guild member obtains 6,400 Renown Points, their portrait will be taken from the wall and instead hung on the frontal side of a small plinth. The hero's name plaque will be hung below their portrait, and a statue of the hero will be erected behind their portrait.

Renown is used to gauge a person's progress during their time at the guild, and can be used as a prediction regarding how famous a person is in Gielinor. Obtaining more renown will increase a person's standing within the guild, obtain unique awards, and increase their rank.

Renown can be obtained through the following methods:

Add a photo to this gallery
Retrieved from "https://rsroleplay.fandom.com/wiki/Guild_of_Heroes?oldid=157210"
Community content is available under CC-BY-SA unless otherwise noted.