Start a Wiki
Grob the Gorilla is a character played by Raltin Avarr.

Grob was born on the island known as Ape Atoll, and grew up on the traditions of strength and stolidness that is characteristic with most Gorillas of the isle, his father wanting him to follow the old time tradition of acting as a guard and soldier for the island. Grob however was gifted with a mind set for politics, much to the displeasure of his father. Grob prefered methods of conversation to that of brutality, and instead focused on the economics of the island rather than the long life style of tireless guard duty.

When he came of age he eventually purchased a banana plantation to gain influence with the rest of the population of the island. This proved profitable, as he soon began to own more land, purchasing it with the money earned from the plantation. Mahogany harvests were added to his small corporate empire on the island, and life became a myriad of business for the big ape. Through all his work however, he never forgot his duty as a Gorilla to Marimbo, and frequently visited the temple in the village to pay his respects and remember the more fun side of life.

This and his wealth contributed to his eventual rise to the temple hierarchy. With his foundations secure, he began to take a more head on approach to the political side of the island, his temple status and wealth opening many diplomatic doors. So came the day that he rose to the heights of the island's government, becoming a right hand ape to king Awowogei.

After spending his whole life on Ape Atoll, he began to wonder what was off the island, and so began his great venture. Using his vast resources, he eventually managed to obtain an amulet of manspeak, and announced his intent to Awowogei, his peers at the church, and his father.

He arrived at a beach on the mainland of Gielinor, and after a while of walking, found the city of Falador. There he entered the bar and the many strange tales of that environment are best left unspoken.

It was at a day in the rising sun inn of Falador that Grob was sitting, eating a watermellon when Death appeared, as was the custom to reap the souls of those who died that day in the tavern. However, death tripped on a fallen stool and twisted his ankle. Grob came over with concern, and offered assistance to Death. Injured, Death could not preform his duties as reaper that day, and so Grob took it on himself to help Death. Death gave unto him black robes and a scythe, and told him to begin at once.

Grob traveled across Gielinor that day, seeking to carry out his temporary duty. The job took him to Morytania, where he was slapped in the face by an angry vampyre, whom Grob had mistaken for the person who needed reaping. Grob then went to Al Kharid, where he was greeted with similar methods. At the end of the day, he returned to the tavern of Falador, where after having rested, Death was able to reclaim his station. Death however was disappointed in Grob, for he had not taken a single soul that day, as the entire search had been for a man named "Peter Philips".

When Marimbo set foot onto Gielinor, Grob was overjoyed and immediately took a break from his serious adventures to begin spreading the mirth around. He went to Lumbridge and joined the party; and started traveling to other places to spread the word of Marimbo. His most recent venture has been to the Sanctum of Heros; where he threw fruit, used dehydrated powder on the fountain water to turn it into wine, and shared a drink with a Fremennik named Haakon.

Grob is a large for a gorilla, and among his kind is an impressive specimen of a silverback, weighing 450 lbs, the majority of it muscle. He has a low yet expressive brow, his eyes being a rich brown in color. He aquired a pipe one day on Ape Atoll, and this is one of the things that sparked his curiosity about the mainland. He can often be seen stuffing banana peels into the pipe, puffing out the smoke from burning them.

Grob is a refined gorilla, enjoying the finer points of culture and society. Some judge him first on this, even though that he is actually a joyous fellow, finding enjoyment in all the jokes, large or small, that one can think of. Like the majority of his kind, he eats mainly a vegetable and fruit diet, though he seems to have found no favorite among these foods. But also like some other gorillas, at times he can have an explosive temper. He also loves music. Being a devout follower of Marimbo, he will take every opportunity he can get to party, between work and travel; it's all about having a good time. 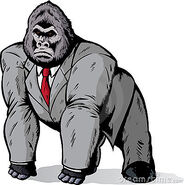 Grob discovers that he hates peppers.

Reaper for a day (short term substitute rp)
Add a photo to this gallery
Retrieved from "https://rsroleplay.fandom.com/wiki/Grob_the_Gorilla?oldid=111540"
Community content is available under CC-BY-SA unless otherwise noted.