Start a Wiki
This page serves as a source of information about the Fremennik as it is applicable to World 42 roleplaying characters. Everyone is invited to add to this information.

The Fremennik people arrived on Gielinor from their home world of Teragard, the birthplace of humankind, during the First Age, when Guthix first began to populate Gielinor. For a very long time, the Fremennik remained a nomadic people who traveled the land, but the majority eventually gave up this life style and formed a settlement, which they named Rellekka. Some Fremennik disapproved of this, as they saw it as a disgrace to their heritage, and a small number split off from the main population to remain nomadic; this group still exists today, being known as the Mountain Tribe.

As time passed, the Fremennik people explored the Northern seas, finding what is today referred to as the Lunar Isle. What was found on the isle turned out to be the very first rune essence mine, and those that discovered the essence found that they were able to craft runes from the very rock itself. This discovery sent shock waves rippling through the Fremennik population, as up until then they believed that only the gods were worthy of creating runes, and many were fearful that this would bring forth punishment from those divine powers. However, those that discovered the rune essence insisted that it could be used to defend their people from invaders. The dispute became so heated that those who discovered the rune essence broke off from the Fremennik tribes, and formed what is today known as The Moon Clan.

Other islands were found as well, and the Fremennik came to settle them. One story tells of two brothers who left the mainland to find their own lands to rule. As the brothers hated each other, they separated and one found a barren island with good fish stocks and metal deposits, while the other found a lush green island that supported grazing yaks and held many trees. When the two found out that the islands they discovered were right next to one another, they and their fellow settlers battled with one another for control of both islands. Eventually, their father, who was the chieftain of the Fremennik at the time, had to intervene. When he asked who owned the islands, the first of the brothers instantly claimed he owned both and it was the truth, causing the other to say "Neitiznot", and the first claimed "Jatizso". The father split the two away from one another and gave them the islands they claimed, which today are named after the words of the brothers; the islands of Neitiznot and Jatizso. Two more islands came to be settled; at first they were named Miscellania, but a civil war broke out between the inhabitants, and the smaller island broke away to become known as Etceteria. Despite the conflict, these island nations remained faithful members of the Fremennik tribe.

During the early days of the Fifth Age, the Fremennik caught wind that the Moon Clan had branched out onto the mainland of Gielinor, and were creating special altars where runes could be crafted. The Fremennik saw this as an affront to the gods, and they stormed down from the North; attacking and pillaging the South, destroying every altar they came across. These series of campaigns against runecrafting became known as the Rune Crusades, and they are still remembered as a vicious piece of history by many. The crusades forced the Moon Clan back to their isle in the North, where they remained on the defensive for the rest of the Fifth Age. From the destruction caused by the Rune Crusades rose up yet another splinter group of the Fremennik: the Barbarians. The Barbarians were born from a standstill in the Crusade when they failed to receive orders to attack Varrock, and they stayed where they camped; creating the settlement of Gunnarsgrun. Unlike the other splinter groups, the Barbarians maintained a healthy relationship with their parent group, the Fremennik.

It was only towards the end of the Fifth age that relationships between the Fremennik, the Moon Clan, and the Mountain tribe were finally repaired, thanks to the help of a great Adventurer. This Adventurer, as it turned out, was written of in a set of prophecy tablets that predicted the second rise of the Dagannoth. This adventurer, as it was written in the tablets, brought the clans together once more in peace, and through a joint effort, defeated the Dagannoth scurge. Since then, the tribes have improved relations, and now coexist in peace. The end of the Fifth age also saw the great pillaging of Daemonheim; as the Fremennik came to the dungeons to test their might against the monsters found within.

Rellekka, the ancient settlement of the Fremennik.

Daemonheim, the place of pillage.

The camp of the Mountain Tribe; the ancient splinter group of the Fremennik that chose to remain nomadic.

Gunnarsgrun, the settlement of the Barbarians. 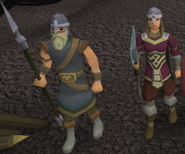 A warrior man and woman. 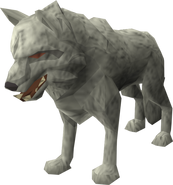 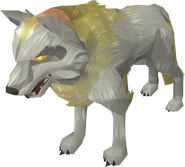 Sköll, Hati's greater brother.
Add a photo to this gallery
Retrieved from "https://rsroleplay.fandom.com/wiki/Fremennik?oldid=157479"
Community content is available under CC-BY-SA unless otherwise noted.