Erebyx is a Mahjarrat role-played by the player of the same name, Erebyx. He is a Mahjarrat of remarkable power, although his full potential is not known by most. Erebyx is cunning and mysterious, similar to the Mahjarrat Sliske, his reasons for the good of himself or Zaros or Itchlarin. He is similar in being elusive as well. Erebyx is known to have a grasp on the Shadow Realm, but not of any other realms so far.

Erebyx was born in Freneskae years before Icthlarin brought the Mahjarrat into Gielinor. Erebyx was raised by, as with most other species, a mother, and a father. He was taught what a Mahjarrat should know; How to shapeshift, Mahjarrat's magic capabilites, sensing other mahjarrat, and teleporting. He participated in some, but not many, of the frequent wars and battles that erupted on Freneskae.

Icthlarin, and arrival to Gielinor

Years later of Erebyx's life in Freneskae, a demi-god, by the name of Icthlarin, came to their world. This jackal-headed demi-god, asked the Mahjarrat for aide in a war, against another god by the name of Zaros. Icthlarin promised them war, and for that, many Mahjarrat accepted, along with Erebyx. But, Erebyx had other reasons besides war. He did slightly enjoy war,yes, but the main factor of him joining Icthlarin was his curiosity. He had never seen something like Icthlarin before, and so he wondered what this world that he would be taken to would be like. So, with that, he went with the majority of Mahjarrat into the world of Gielinor. Erebyx was amazed when he arrived in this world. It was such a vast difference between the world he had previously lived on for almost 3,000 years. It was beautiful in his eyes. For this and Icthlarin's promises, he began to worship the demi-god.

When the war between the two opposing factors occurred, Erebyx proved to Icthlarin to be a worthy subject to have. His strategies and ideas to fight the Zarosian Empire worked, and deemed efficient. Throughout the years the Mahjarrat were in service to Icthlarin, Erebyx moved up the ranks. Erebyx fought using a various magics, favoring in geomancy. He did participate in battles himself, slaying a fair amount of opposers.

At the last battle Erebyx participated in, he came across a Ripper Demon that fought for the god, Zaros. Having seen the demon destroy many of soldiers of the Menaphite empire, he attacked the demon. The Demon and Erebyx clashed into a battle. Erebyx was dawned in his battle-mage robes, an orb, and wand. Uztop of course, had his claws. As the demon charged, Erebyx summoned forther a small pillar rock infront of it from the earth, tripping Uztop instantly, but quick in reactions, it somersaulted back into action. Swinging it's claw, Erebyx reacted by drawing forth another wall of stone, trapping the claws inside. Erebyx then casted forward three more walls to surround the hostile. Then finally closing it with the roof, he drew the structure back into the ground, entrapping Uztop for death.

After the war,the Zarosian Empire was pushed back, his Mahjarrat brethren joined Zaros after Icthlarin took Sliske's Wights and sent them back to the afterlife. Erebyx did not want to leave Icthlarin as he understood that he was the caretaker of the death. Eventually Erebyx did leave the Menaphite Empire and service to Icthlarin for Zaros as had the rest of the Mahjarrat, Erebyx, being one of the last mahjarrat to leave Icthlarin. Erebyx did promise Itchlarin that he would continue to worship him to a degree for bringing him to Gielinor, and being the caretaker of the dead, hoping that it would help him later on in his years if he ever did die..

Now that Erebyx was following Zaros, he did not need to be as active as much, seeing as other mahjarrat had situations under control. He did preform few tasks in the name of Zaros. As Erebyx did also continue to pray and worship Icthlarin, he did so as well to Zaros.

Although Erebyx did participate in the God Wars briefly, he was not an active participant in it. Of course, due to being alligned with Zaros and Icthlarin roughly at the time, he fought for Zaros as his god. Erebyx was known to be a powerful mage, speciallizing in geomancy, and his creative uses of it. He was known to build bases out of stone summoned from the earth, or even trap whole battalions in the same trap he used on Uztop.

During one of the numerous battles that took place in the God Wars, Erebyx was captured by Saradomin forces. Erebyx was interrogated and tortured by early members of the now famous Temple Knights. He was held as a Prisoner of War for roughly 3 years before he taught himself to persuade the captors to release him.

After Erebyx was released from capture, he abadoned the God Wars. He retreated back into the depths of Zarosian territory and waited it out. At this time it was where he learned more about himself and his capablilites, testing his limits on abadoned structures and that of the sort.

The Sanctuary In the middle of the God Wars, Erebyx discovered a cavern. This cavern had many levels to it, in which he continued to alter it and enforce it using geomancy, thus forming his sanctuary. He spent his years of the 4th and 5th ages in here, practicing, studying, and testing his limits. He was completely isolated from the world.

-After nearly being killed, he is nursed back to health and joins the Dominion of Ancients

-He joins the Empire of Gielinor

-He takes position as a general of the Kinshra

-He then joins the Phantom Resurgance

Erebyx stands at 6'1". He weighs in at around 210 lbs and is fairly muscular. He has blue eyes, and black hair. Erebyx is quite confident, a bad liar, and can go insane sometimes. He's quite cold hearted, as he describes himself the shadow to every light.

Geomancy- This is his main weapon. He is a master at geomancy, having perfected it over the thousands of years of warfare and practice

Fire- This is his secondary magic. He mainly uses this for recreational purposes, such as lighting, cutting, etc. Fun fact, he has almost mastered the art of fire breathing, so watch out lol.

Smoke- He uses smoke as his distraction, and entertainment at times. He can summon small amounts of it at his will controllable, the larger it becomes the harder it is for him to concentrate on it. 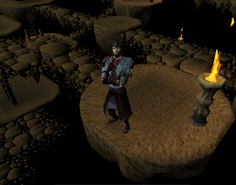 Erebyx in his sanctuary
Add a photo to this gallery

Retrieved from "https://rsroleplay.fandom.com/wiki/Erebyx?oldid=116721"
Community content is available under CC-BY-SA unless otherwise noted.