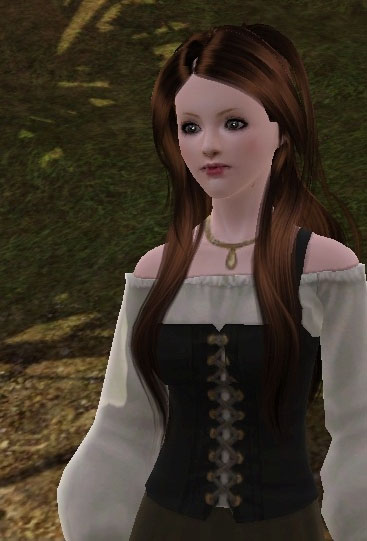 Emiliana Dawn, also known as Emi, is a human female character who originates from a middle-class family in Varrock. She has a flourishing interest in the visual arts and is often found practicing figure drawing with a sketch book. This character generally exhibits a shy personality. She is currently alive.

Long and light brown, thick, and slightly wavy and falls down to her waist.

No scars or blemishes, but a few faint freckles and dark brown eyes.

Emi is usually found wearing a dress just above her knees. She always wears a headband of some sorts, whichever colour it may be.

When Emiliana was born, she was living in a middle-class style home in Varrock. Her father, being a rich man, porvided them with food and neccesary things to live by. Emiliana's mother, Luina, was a decendant of a noble family who were going bankrupt and her brother, Luke, was a young lad who was set to become the new head of family. Even though it was an arranged marriage, Luina and her father, Vladmir, loved one another very much. They also had an adoptive son, Glamir, who was dumped in the streets. They lived in happiness until when she was four years of age and Emi's father and brother, Luke, suddenly dissapeared. Eventually, the money to help them survive ran out, and they sold the house in a last ditch effort to get some coin to buy things to live. Alas, it was still not enough for a decent way of life and they bought a shack as a home. Luckily for Emi, she was able to purchase a few sketchbooks with a few copper pieces. She still has two to this day, the other two are hidden elsewhere. After being cast onto the streets, Emi's mother developed a disease and four years later died of heart failure when Emi was eight years of age. Since then, Glamir and Emi lived with eachother, but Glamir drank alcohol to help the pain of grief and eventually became an alcoholic, occasionally pushing Emi around. Eventually, at twenty-one years of age, Emi left Varrock for the first time, deciding to escape Glamir and see the world, and sketch it.

The Pick and Lute

Arriving at Taverley one day, her first destination, she met Cliff Rovin at the bar there. As she was not able to afford anything to eat or drink, cliff offered her a free drink and meal. At this point they became firm friends, and Emi decided to help out at the bar. But, sadly, one day Emi was kidnapped, and experimented on by Aranitus. Luckily, The Rovins saved her and she feels she owes them a huge debt, and if she spots Cliff or one of the rescuers, you can often see her being helpful and kind.

After the Incident, Emi's self confidence was knocked down several stages. She feared leaving the house, but eventually met Garran crux and Ashley Arven, before having a small chat with them. At this bar she met Kas, and he gave her a pouch of coins. Emi went to give the coins to Cliff, but he refused them. To this day, Emi vows to somehow repay Cliff. After the encounter, Emi became much more confident, eventually meeting Eden Syvian, who she respects. Eden assigned Kas to look after Emi (At first he was reluctant) and Emi and Kas became very good friends.

Meeting Families of New and Old

Soon after, she returned to her shack at Varrock, to show Kas where she lived. They stayed there a few days, until Emi's father, Vladmir, rushed into the shack chased by armed men. Emi and Vladmir had a quick reunion before the men rushed in. At this point, Kas and Vladmir engaged the men in battle as Emi watched. After the battle, Emi was sick and she now knows she hates battle, blood and gore. Although, she did save her father's life by leaping on a man who was to shoot him with his crossbow. Vladmir then had to flee once more, but vowed to see her again. Emi and Kas went back in the shack where they admitted their feelings of eachother. Now, they are together, and Emi looks up to Kas as a role model, and wishes to learn how to fight to be more of use to him.

The Dusks and The Fight

After seeting up The Dawn family again, her family's archenemies, who they had been battling for generations, re-emerged after they did so. The enemy family, The Dusks, made their old Lord turn Kas to their side, meaning their relationship was near ended. At one point, after burning down most of the citadel, Emi faked her death in an attempt to bring back Kas' feelings by using remorse. She even hid this from her family, and, in time, she revealed herself to them. She took the disguise as Jalik Dawn, who was a "mute" and previously lived on the Freminnik Isles. She even stopped Kas from harming himself after presenting Emi's "last" letter, which made him promise not to do so. Later, in the Manor Fire, she shouted over the flames to alert The Dawn's to retreat, revealing herself to have a female voice. When Kas confronted her about this, she carried on disguising herself, revealing that she is infact female but hid herself due to concern of her safety. Later, Emi named herself "Summer Archale" but never revealed this to anyone.

In the events that followed, Emi was slowly driven insane by the fact that her family were both angry at her for lying about her death, and for also making rash decisions. Emi slowly drove herself to fight harder and stronger, and in turn became full of war inspired thoughts and plans. Noticing this, Kas came to her aid, but she rejected him and told everyone the only thing she had left was the war. Kas convinced Emi's brother, Luke, to stab him, and Luke did so. Emi, still slightly unstable but scared for Kas' life, healed him. She then threatened to kill herself if he died, claiming that she still loves him. Emi then marches away, as to which Kas chases after her, and she breaks down in his arms. They both vow to bring the families together and stop the war; for both their snaity and their lives. After moving into the manor before rebuilding the citadel, Emi was then re-toppled over the edge of sanity when Lucie stabbed her brother, and so Emi dressed in dark colours and claimed she was going to kill whoever gets in her way. Finally, Lucie, Robert and Luke talk her out of it, and she returns to normal.

At one point, Emiliana's Grandfather, Estogan Dawn, returned to the manor; much to Kas' and the Dusk's dissapointment. Emi respects her Grandfather highly, and even introduces him to Kas. Later, after Emi and Kas are locked in the storage closet, hiding from Estogan, Kas proposes to her and she accepts. She then forces Kas to tell Estogan, who isn't so happy at the news.

Even though Emi and Kas are now happy, Emi's feelings are still a bit stirred from the past events, and occasionally finds herself either extremely angry, happy or upset, and sets these out as altar egos. Her bad moods are now Summer Archale, who hides behind the armour Emi previously wore. Her good moods are herself, and she vows she will not hurt anyone she loves, and so Summer will be seen walking around Falador, either calming herself down or letting her true emotions show.

Emi and her Sketchbook

Emi is extremely protective of her sketchbooks; one she carries with her at all times, which is half completed, and one empty one she keeps safe somewhere secret. She sketches most people she has met, and these people are whom she has sketched:

Retrieved from "https://rsroleplay.fandom.com/wiki/Emiliana_Dawn?oldid=125673"
Community content is available under CC-BY-SA unless otherwise noted.