Elise Stuart is a Misthalin actress, playwright, fashion designer, dancer, producer, singer, and model, originating from Taverly, as well as a former Void Knight, having given up her position as Captain to pursue an entertainment career.

As a druid, Elise was a natural in the fundamentals of Alchemy, otherwise known as Herblore. To this day, Elise may be seen perfecting her craft during her free time, which is when she is not hoarded by cameramen. Alongside her fine alchemy prowess, Elise is also a renowned Chef, who often cooked for her Void Knight peers during her days as a Void Knight. Finally, Elise is not to be over looked in the heat of battle, as her combat abilities have earned her the title of commander among the Void Knights.

Elise Stuart is played by Rachel.

Elise was born as the third of seven children to a loving couple of Druids residing in Taverly. Although her mother was renowned for her beauty, Elise appeared rather unattractive to most during her childhood, earning her the nick-name of "Lady of the Ugly" among her peers. Constant bullying resulted in Elise becoming a social outcast. She refused to speak with anyone and everyone, afraid she would be made fun of. Meanwhile, all of her siblings seemed to be achieving great feats, such as her brother Arthur, who earned recognition from all of Taverly for his marvelous Herblore prowess.

Afraid Elise would become a failure, her parent's shipped her off to the Void Knights' Outpost to ensure the protection of their household name. Though reluctant at first, Elise grew as a Knight under 20 years of squireship, and for once, finally felt of use.

Elise is a slim young woman of above average height and is renowned for her beauty. She has long, wavy and flowing blonde hair, gathered on the back of her head and tied in a ponytail that reaches down to her middle back, with two short bangs framing her face, and a decorative flower with large petals adorning the right part of her head, above her right ear. Her face is soft in shape, and she has large light blue eyes with long eyelashes and full lips.

She sports a top-model physique, being slim but at the same time sporting a large bust and ample hips. She has large breasts, and a curvaceous body. Her presumed measurements are Bust: 114 cm; Waist: 59 cm; Hip: 91 cm (45in, 23in, 36in).

Elise's attire is yet again Eastern-looking, with the woman wearing a strapless dress highly reminiscent of a "Cheongsam". This is shown to possess a large slit in correspondence to Elise's left leg, exposing it all up to her thigh, and comes secured to her body by a number of dark laces on the back and to her right side, exposing a part of her right breast's back side, and by a line of metal fasteners taking the shape of two horizontally-placed triangles with their bases linked together on her front left side.

Arriving from Taverly after being rudely shipped by her parents, Elise overcame a brief depression and began squireship under Commodore Matthias.

Oddly enough, Elise's arrival could not have come at a worse time, as the Year of 149 was the period of time in which Melville Grayzag chose to open dangerous portals to another dimension, allowing insect-like projectiles to infest the world of Geilinor. Thus, Elise spent much of her squireship aiding in the battle agaisnt these pests.

Elise awoke one morning, preforming her daily set of stretches and exercises she conducted every morning to help her day function more properly. Upon waking up, she noticed her roommate, Sierra was not in her bed, and assumed some important meeting was being held. Throughout the outpost, Elise was known to be a rather deep sleeper, and assumed this was why no one had bothered to awake her beforehand. None the less, Elise took her time through breakfast, and by the time she reported towards Commodore Matthias' office, everyone had already left, himself included.

Traveling through the outpost proved a challenge, only because there was no one around at the time to greet Elise. Despite being very independent in her youth, Elise became the center of attention eventually, and felt defeated with no one around to relish her good looks. Arriving in Commodore Matthias' office, Elise came across Captain Korasi, whom Elise greatly adored as a role model. Captain Korasi critisized Elise for her easy going perspective as of late, and instructed her to aid in the search for a pest who had managed to slip inside the Void Knight ship on their way back to the outpost from the Pest Control Island.

At the time of this event, Elise was anything but confident in her own combat abilities, and often found herself visiting the outpost infermory on a day to day basis, following a great beating at the hands of the pests. For once, Elise traveled into the infermory unharmed, much to the surprise of all the present tenants. Once there, Elise proceeded in searching the infermory shelves for ability increasing potions, which she could use to aid her in battle if she indeed found the missing pest.

Surely enough, Lazy Elise, as she was often reffered to by her Voided peers, found herself a nice tree to sit agaisnt in order to further enjoy her favorite novel, Pegasus' Book, the autobiography of the legendary Saradomin adventurer. While reading from the book, Elise overheard very familiar sounds in a nearby ship. Sparking her interest, Elise sprouted from her momentary paradise, and confronted the mysterious chirping, only to come face to face with the missing pest. With the help of the potions she had obtained earlier, Elise managed to slay the beast after several moments of panicing. At some point in the battle the pest seemed to have ruined her hair, which angered Elise greatly, enough to inspire the fragile woman into a hard earned victory. Upon saving the day, Elise was celebrated for a few weeks, until everyone became agitated by her lazy attitude once more.

Upon completing 20 years worth of squireship, Elise was knighted into a full-fledged Void Knight. Trained directly by Commander Korasi, Elise proved to stupendous in the arts of combat. Unlike her predecessor, being of druidic heritage allowed Elise to surpass Korasi in the magical field, as well as bring more to the table in terms of medical treatment.

Quiet Before the Swarm

Elise was present toward the top half of the outpost near Commodore Matthias' office when an adventurer came about questioning the knights about any suspicious behavior. Elise found it odd that this adventurer was asking of such personal information, and found it betray-some to give any information pertaining to her fellow Void Knight peers. She provided the adventurer with little no help, telling him the only one acting suspicious was Squire Sam, who was always over protective about his cake.

Elise later defended her dear friend Jessika, a researcher from the Wizard's Tower, whom she came to know during her tenure at the Void Knight's Outpost, after she was accused of having set a pest free. However, it was later discovered that Jessika indeed had set the pest free, after the adventurer traveled into her mind using a mind potion of some sorts. Jessika was eventually captured, and Elise was instructed with the honor of guarding the traitor. Since Elise was busy in looking after the imprisoned Jessika, she was not present during the contingent to the mainland, where a vast majority of Void Knights, including Commodore Matthias, were slaughtered.

As one of the knights in charge of guarding Jessika, Elise was to aid her instructor, Commander Korasi, Jessika and the adventurer, on a long expedition towards Port Sarim to locate the missing pest Jessika had been responsible for. Similar to Commander Korasi and Jessika, Elise laid back and watched as the adventurer did most of the work, including communication with nearby sailors, mining jail walls, and solving a rather horrific crate puzzle.

The group later traveled to Karamja to gain further intel on any suspisicous where abouts, where again, the adventuerer took care of majority of the communication work. Elise later accompained Commander Korasi and Jessika to the chemist's house, whilst the adventurer was busy handling a Waxwood issue.

Elise is eventually reported by Jessika along with the rest of the group to the Falador Park, where they met with Sir Tiffy Cashien about a tedious puzzle box. Commander Korasi eventually cracked the box, only to discover more mysterious goo.

Elise stayed behind with Jessika and Commander Korasi whilst the adventurer took care of even more business single handedly, until eventually, the adventurer required assistance in a fight against a group of Black Knight Guardians.

The Void Stares Back

Elise arrived alongside her commander, Korasi, Jessika, and Sir Tiffy Cashien to aid the adventurer in his battle against the evil mastermind, Wizard Melville Grayzag, and the unforsaken mother of the pests, otherwise known as the Pest Queen.

Fighting alongside the White Knights, and the Black Knights, the Void Knights proved to be a force to be reckoned with and emerged victorious agaisnt Grayzag and the pest queen. Following the victory, Elise was promoted to the rank of Captain.

Following the death of Guthix, Elise no longer saw much reasoning in staying at the outpost as a loyal knight, as there was no longer anyone to be loyal to. Elise resigned as a Void Knight Captain, and pursued a modeling career. Early in the 6th Age, Elise signed a multi-million dollar contract with The Geilinor Modeling Agency, and inked a multi-year contract with her manager, Steven Stone. 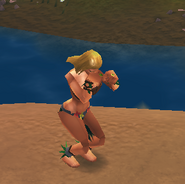 Retrieved from "https://rsroleplay.fandom.com/wiki/Elise_Stuart?oldid=149288"
Community content is available under CC-BY-SA unless otherwise noted.