Ehrick Commodus Elderon was a man of noble ancestry, carving his name in the history of Gielinor. He was respected by many, and feared by denizens of the darkness. His exploits include reigning over Varrock for several periods of time, and fighting back the Mahjarrat Migration of his third term, slaying their leader, Zenthos, in a one on one duel.

Ehrick Commodus Elderon was born in the Winter of the the Year 121, of the Fifth Age. He was brought into that of a prominent noble family of Varrock, a city with quite a history. His family were worshippers of Saradomin, and very devout ones at that. He was surrounded by his mother, aunts, and grandmother for the first 5 years of his life, his father less influential at this time, though still looking upon his newborn son with favor. Soon, Ehrick would be taught in the ways of a man.

At the age of 6, Ehrick's father, Caius Elderon, took him in, beginning to teach him what his own father had taught him. He took him on hunting trips, and prepared him for the life of a noble; he'd naturally have people under him, he was important. Moreso than the average Varrockian. Ehrick seemed to have gained an early knack for maturity, as he didn't show his nobility off to the other children of the city. His father respected him for his humility, which was rare in a child, espescially one his age. He had developed a very strong vocabulary already, and seemed to have the potential to be a very strong leader.

Ehrick had a brother, the 10 year old Peter, whom Ehrick loved very strongly. He looked up to Peter as a role model, someone he'd like to be like; he wanted to make Peter proud. Even so, Peter thought differently of the younger Ehrick. In the years earlier, when the women of the Elderon family had showered Ehrick with attention, the younger Peter had first started to envy his brother, though he had received the same treatment. This envy morphed into resentment, as he noticed the favor within his father. Caius obviously loved Ehrick more than him. Peter thought such a thing absurd, after all, he was the firstborn son. Such thoughts turned him into a bitter child, knocking over things and harming the family pets for attention, and a place to take out his rage. Eventually, he turned his abuse to another.

Peter's abuse towards Ehrick started out rather harmless. He nitpicked at Ehrick, looking for flaws in his daily chores and other tasks. He called him names, which Ehrick simply dismissed as a joke. He didn't think his older brother could truly mean to harm him or his feelings. Peter's abuse began to become more dangerous, he tripping Ehrick, or pushing him down. Ehrick was becoming confused, feeling as if he was outside of the big joke. The young boy still did not confront his elders, seeing no real danger.

Ehrick was called for by his father,whom told him the 8 year old would now begin horseriding and fighting, with such items as bows and swords. Ehrick was extremely gleeful, having waited a long time for such a privilege. On the other hand, Peter steamed in anger; he had not been permitted to begin training until he was ten years old. This was yet another example of the families favor towards Ehrick, he thought.

Ehrick was called into the foyer by Peter, on one day. Upon entering, he was roughly grabbed by his older brother, and dragged towards the lit fireplace. Ehrick knew not what his brother meant to do, wishing he would stop holding on to him so roughly. As they reached the fireplace, Peter pushed his right arm forwards, towards the fire itself. Ehrick squealed, squirming as he tried to avoid the fire, but it was to no avail. His arm was pushed in, as Peter held it there with a blank stare. His eyes watched as the fire caught hold of Ehrick's sleeve, and burnt it, as it travelled to touch his skin with its warm embrace. Ehrick screamed and screamed, as it ravaged his arm, this lasting a good few moments, before his elders could arrive and tear the two boys apart. Ehrick was treated for his wound immediatly, suffering bad burns all up his arm

Despite any herbs or bandages local doctors could apply to his burns, Ehrick would forever have a long, dark scar moving up and down his arm. This would serve as a constant reminder of the past for Ehrick, the experience traumatizing him greatly.

After gaining knowledge of what had happened, Ehrick's parents sent Peter to stay with relatives for an indefinite time. The young Ehrick had not spoken for many days, traumatized by the experience. The new wounds on his arm made him feel self-conscious, afraid that other children would make fun of him. He kept to himself for nearly 2 years, talking only when required and simply completing the tasks he had. He had frequent night terrors, bringing him back to that day. This lasted for about 2 years.

At the age of 10, Ehrick had begun to come back out of his shell, growing less afraid of his brother and the memories that came with it. He had little friends outside his family, such is the life of a noble. His friendships grew with a few of his cousins, and he had started to talk more. He still had a few nightmares, but for now, they were growing to be a thing of the past. He usually kept his right arm covered with long-sleeves, effectively hiding his past from even himself.

Over the years, Ehrick had reached a satisfying level of skill in swordsmanship and riding, also having some skill in crossbows. At the age of 11, he became a squire for a Knight of Varrock, named Sir Geij, a friendly but stern man. This man, a strict Saradominist, further taught Ehrick ideals that he would keep with him for the rest of his life. And so Ehrick officially became part of the politics in Varrock, something that would rise higher and higher until he found himself king. 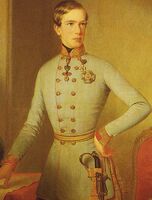 Shown here is an Emperor of old, though his similar appearance to Ehrick made him a great choice for the 17 year old Ehrick. 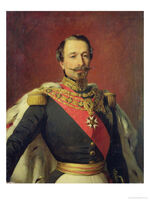 Shown here is the present Ehrick. It is a very good representation, everything spot on except his hair being blonde.
Add a photo to this gallery
Retrieved from "https://rsroleplay.fandom.com/wiki/Ehrick_Elderon?oldid=66464"
Community content is available under CC-BY-SA unless otherwise noted.