Darna Ardoy was born on the 4th of Septober, in the year 123, to parents Lola and Chancy Ardoy. Lola's mother, Darna's grandmother was an icyene, though they do not know this because she left when Lola was a baby, and her father died before he could tell her. She has two sisters, called Hesia and Micha Ardoy. Hesia is the oldest, while Micha is younger than Darna. Darna first found out that she was inheriting the family money when she was eighteen. This caused much annoyance to Hesia, who thought she should be the heir to the family's 1.3 million gold pieces. Hesia left her family, only staying in contact with her uncle.

When Hesia was twenty, she was due to marry Vito Levendi, another aristocrat. This marriage was arranged, but Darna already loved another, a certain Nami Kerrat. She broke off the relationship, and married Vito, to keep peace with the two families. They had five kids; Shire, the oldest, Hersa, only girl in the family and second oldest, Hetor, rebel and second youngest, and Jarhe, youngest and most shy.

Of course, the marriage did not go as planned, and Darna broke off the marriage, leaving her whole family and moving to Falador with her 1.3 million gold pieces. There she met Brock Avery, a factory owner, and she fell for him, though his intentions were not revealed to her. She stayed there for a while, but had to leave secretly after a rebellion broke out, destroying her new home.

Darna left Falador for her hometown, Draynor Village, to meet with her friend, Count Baldric. She bought a nice home there, and kept in touch with Brock, though the contacts became very scarce. Her friend, Abbess Frivola Kandatir (recently deceased), brought her a imp, who was ordered to be transformed into an lynx, becoming Darna's pet Linx. She now visits Falador occassionally, and usually takes trips to Ardougne to visit her children there.

On the Eve of Moevyngs, Darna recieved an unexpected visit from a certain Greyson Val, who was then a wanted man. He asked her to clear his name, and she reluctantly accepted. Darna and Greyson came up with different plans to clear his name, the final decision being that they would arrive at the castle and face King Oliver privately. They did, and it had worked. Oliver had greeted Greyson back with open arms, revealing that he had already made a statue of Greyson in his honour. Darna and Greyson then revealed to Oliver that they were in a relationship, having realized they had gone through many of the same hardships. Darna and Greyson live in Hemenster at Darna's mansion with their daughter, Leandra Greyson Ardoy-Val.

After being imprisoned by Michael Sicarus, Darna escaped after three mages blasted down the prison and told her to run to Catherby with her baby. She did, but met Kisbeth disguised as an old lady. Kisbeth had come to kill her due to what Darna percieved must have been jealously, and Darna gave her daughter her locket, asking Kisbeth to take care of her baby, and bring her body back to Greyson. Kisbeth promised and killed her painlessly with a strike to the neck. Darna died under her 16ft statue in Catherby, as it toppled over, cracking at the neck after lighting struck it. The body toppled over into the sea, while the head stayed on the shore, looming over, glaring at the lifeless body of Darna at it's base.

Mummy Will Die With Dignity...

A Song for Darna

This song was pinned to the door of Greyson Val's newly inherited mansion, by a mysterious group:

They have a knife, You can commit suicide.

They have poison, You can drink poison. 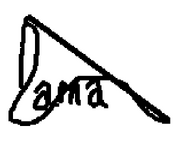 Darna visiting Varrock castle in her 20's. Note that she does not notice the icyene aura emitting from her.

Darna's Hemenster home where she and Greyson Val lived 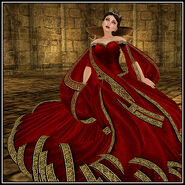 Darna dancing at the reception of her arranged marriage, aged 23
Add a photo to this gallery

Retrieved from "https://rsroleplay.fandom.com/wiki/Darna_Ardoy?oldid=48561"
Community content is available under CC-BY-SA unless otherwise noted.