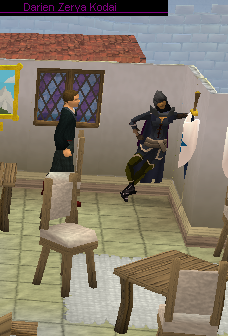 DARIEN KODAI-- She may not be tough, she may not have many talents...

But she will stand by her clan, and fight for it at all costs!!!

Darien is a 16 year old girl, who worships Zaros and has burnette hair. She has large innocent looking, golden eyes. Darien as a girl would sit in school and daydream about traveling the world, her teachers frowned at this, and was often ridiculed by other students. Her mother however, was happy she had dreams of seeing the world. She once found while playing near a stream, a purple Zarosian icon. She always wondered about this, and when she grew older, she wanted to really find out what it meant. She spent much time in the varrock Library reading books with the symbol on it, and eventually started to pray to Zaros. Her father was killed in the war before she was born, and her mother was remarried to a vicious king for political reasons. The man her mother married forced her to be Saradominist, and he would beat her, and her mother. One day she packed up her old schoolbag with some clothing, her Zarosian icon, and a stolen Dwarven Army axe. She searched for a Zarosian group. one day while walking in Falador, she heard 2 men talking about the Cult of the Damned, so she set out to be part of this family and worship the Unholy god of Ancient Magicks.

She died on April 27

-Some people believe because she has golden eyes, she may be associated with another race. There is no real evidence supporting she is a 100% human

Retrieved from "https://rsroleplay.fandom.com/wiki/Darien_Zerya_Kodai?oldid=30194"
Community content is available under CC-BY-SA unless otherwise noted.