Start a Wiki
This page page serves as a guide to fighting with melee while using a crush technique, specifically as it applies to World 42 roleplaying. Any valuable contributors are welcome to add, especially as new content or ideas come out in-game.

The Basic Concept of Crush Melee

When wielding a melee weapon that operates primarily for crushing attacks, the main goal is usually to break or subdue your target rather than wound him. A knight fighting with a crush technique would most likely make use of the weapon's blunt force to hinder an opponent's own ability to fight back, whether it be by breaking a bone or knocking the victim unconscious. This is not the technique that is going to pierce vital organs or draw a lot of blood; most bleeding brought on in this circumstance will be internal. Also, depending on the weapon being used, is not the most prone to strong defensive combat.

The ways to combat an enemy with a crushing weapon are really only limited to the creativity of the player and his character. That being said, here are three examples of common techniques for attacking with the crush style. These include attrition, disabling, and bashing.

This is the most basic of these three styles and is the easiest to perform for less experienced characters. The concept of this method is to put enough wounds on the opponent to sufficiently best him. As such, the locations and depths of hits delivered aren't important in comparison with quantity and severity; fighters using this technique aren't making art, they're making wounds. The only real goal of attrition is to survive the fight long enough that the opponent is exhausted by the fight and any blood he loses through internal bleeding. A character fighting defensively would exhaust his opponent only as much as necessary and then take his chance to flee. A character fighting to kill would at that point progress to a more aggressive technique like bashing (seen below) to finish the fight off.

Considered a more skilled, precise style, disabling is perhaps the most artistic option. This technique favors more advanced fighters with studied training and those assailing victims who are unaware or subdued. The goal of this approach is almost always either to serve as a defense against an oncoming assailant or to draw out a fight and make it more painful than necessary. The concept of disabling is to break key areas that have significant hindering effects on the victim. A knight attempting to disable his enemy would, for example, bring a warhammer down on his extended arm and break the bone. Such attacks would intend to crack, if not break, body parts critical to whatever the knight wants to stop his opponent from doing, like gripping a sword or walking away. Fighters who find themselves in combat against heavily armored foes would adjust this pointed technique to hit a weak point in armor, a thin area of chestplate, instead of a specific body part. A character fighting defensively would most likely disarm or hinder the movement of his opponent before proceeding or fleeing. A character fighting to kill would most likely aim to disable function of critical body parts, like the throat or spine.

Bashing is an alternative to the disabling style that favors hard hits and strong fighters that aren't trying to show mercy. The concept of bashing is to bring the weapon down heavily against any and all contact points, causing breakage and rupture with every successful hit. This takes a strong, confident swings and is an impressive feat of strength when considering the thick hide, bone, and likely armor that have to be overcome with the force of a hit. However, when successfully done, such an attack could combine the end goals of both above techniques; it would result in heavy overall damage as well as giving the opponent a substantial disability, if not shock. Combatants who find themselves in combat against heavily armored foes would necessarily adjust their desired points of contact to weak points in the armor or else face significant difficulty; it's hard enough to crack bone tissue without having to dent through platemail - though if it can't be avoided, this is the best technique to use. A character fighting defensively would most likely crush a non-vital bodypart like a wrist or foot before taking the opportunity to flee. A character fighting to kill would most likely aim for a larger or more vital bodypart like the chest directly over the heart or the skull in order to maximize effect and create injuries that would be difficult for a healer to restore before the opponent passed away.

The most effective way of protecting yourself from any melee technique is to stay away from it. A warhammer that can't reach you is a warhammer that can't hurt you. Crushing weapons, like mauls, tend to move slower than other melee weapons, and that can be used to the advantage of anyone trying to evade an attack. That being said, sometimes this is not really an option, so the best way to protect from crush-type attacks is to block the attack or somehow soften the blow.

Blocking a crush-based attack is fairly straight forward. Get something in between yourself and the oncoming weapon that is sturdy enough to take the force of the impact, thus protecting you. Blocking can be done by just about anything in an immediate vicinity. Ideally, you would have a strong, metal shield to do this - wood, elemental, ceramic, and other materials could work, but will probably break down or fail before solid metal. However, if you aren't so lucky, use anything in your vicinity as a surrogate to deflect the weapon - walls, tables, chairs, trees, railings, crates, whatever you can identify as sturdy. This will work exceedingly well with lesser crush weapons, like spears and staffs, but the effectiveness of a shield against a crushing weapon is inversely proportional to the power of the weapon. That is, versus a solid steel maul, things will tend to break down under the force of its strikes, including your shield arm. Still, placed right, using shields to deflect the force of a crush will often save you from some incredibly painful, or even deadly, collisions.

It's nearly impossible for an individual to successfully block every crushing blow with a shield, so it's a good plan to have some second line of defense that will soften the blow if it does hit its target. This, in most cases, comes in the form of armor, and the best armor for the job is whatever's going to be able to absorb the most shock. Chainmail-type armor, perhaps set over a layer of leather or thick cloth, is the ideal against all crushing weapons. Since the chain can move and shake, it can withstand the force of the attack without taking any noteworthy damage. The force would spread out over the links, distributing the force over a wider area of impact, and the leather underneath would cushion against some of the bruising from the chain. For lighter, weaker crushing weapons, thick leather may be enough to stop a blow from doing critical damage. Platemail, however, is something of a risk. There is a fine line between when plated armor is safe and when it is not; against a weaker crushing weapon, like a staff, platemail would be a godsend. However, as soon as the crushing weapon gains strength, as with a mace or warhammer, platemail becomes dangerous; any successful hit will most likely dent your armour. This could potentially not only limit mobility and uncomfortable, but if the dents are severe enough, also cause difficulty breathing or form sharp internal ridges that would cut into the fabric or skin underneath.

This is a list of all melee weapons in Runescape that can be used with the crushing technique. Not all listed weapons are ideal for the strategy, but may still be used.

This category addresses traits or actions that players, often new ones, give their crush-style fighting characters but that aren't actually accurate or otherwise realistic scenarios for someone using this attack style.

Parts of a sword. Some swords, such as large longswords or claymores, are used for crush attacks. 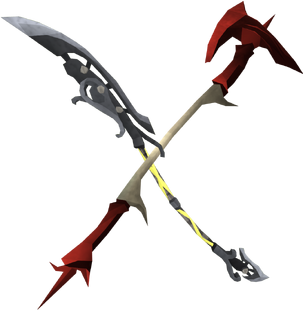 A blisterwood polearm and dragon halberd.
Add a photo to this gallery
Retrieved from "https://rsroleplay.fandom.com/wiki/Crush_Melee?oldid=136511"
Community content is available under CC-BY-SA unless otherwise noted.