The Second Cruor-Lionheart War was a war between the Republic of Lionheart and Das Kaiserreich der Cruor. The war was started due to the attacks on locations in das Kaiserreich such as der Mittelturm and ports in select cities, the attacks conducted by Lionheart. The Council of Gonzo then met to end up declaring war on Lionheart.

Battles raged on in both Nazshaar and Cruor, and both sides could not get the upper hand on each other in their own land unless it was a small battle or a skirmish. Eventually, Lionheart conducted a full on invasion of the Cruorian continent, which led to months of fighting for Cruor and left Cruorian cities in ruin, however the Cruorians prevailed and pushed the Lionheartians back into Nazshaar. Following the defeat of Lionheart on Cruor, Cruorian soldiers finally reached Lionheart City and attacked, defeating Lionheart in their own capital and ending the war in Cruorian victory.

Prior to the War

Events prior to the war.

All sides before the war

All sides involved prior to the war.

Das Kaiserreich der Cruor had been in a state of semi-peace, semi-war. They had ships being sent to the Feldip for conquest and hostilities with the Republic of Lionheart were ever increasing.

Lands owned by das Kaiserreich before the war had started, as they are known as today.

The military power of das Kaiserreich.

Commanders on the side of das Kaiserreich.

The Republic of Lionheart

The Republic of Lionheart had been in a state of peace, just going through the official government formation and military recreation, and had been showing acts of war against das Kaiserreich for months prior to the declaration of war.

Lands owned by the Republic of Lionheart as they are known as today.

Commanders on the side of Lionheart.

The speech given to the citizens of das Kaiserreich from Kaiser Aztarwyn himself. It was copied onto paper and released to the citizens all over the empire. The official document he had written the speech upon is kept in Hauptsitz.

Dear all of my citizens of das Kaiserreich der Cruor, today on the 18th of Pentember, Year 7 of the Sixth Age, we go to war with Lionheart. On the 31st of Bennath, Year 7 of the Sixth Age, they had attacked our land in a terrorist attack of der Mittelturm, killing many innocents. I am pleased to inform you out of the eleven terrorists, only one remains currently, with no legs or arms. For awhile there had been debates of war, however we took too long. Because we took too long, they decided to make up our mind.

Just yesterday, the Lionheart Navy and Army had attacked the ports of Hauptsitz Stadt and Blutstadt, causing utter chaos as soldiers were destroyed with incoming fire from their warships. Thirteen of our warships had gone down, and many of our men had perished. This was an open act of war, one that shall not go without punishment.

They look to destroy our nation, our home, and our people. For these reasons and these acts of war against us, we must go to war with the Republic of Lionheart. They will suffer our wrath just as our people had in two acts of war, only our wrath will be a hundred times worse. Their people will die. Their soldiers will die. Their land will be destroyed. If I must, I will see to it that their entire nation is ripped to shreds.

And so war it is.

Battles in the war

Battle of the Central Sea

The battle of the Central Sea is between fleets of both navy's going at it mid-way to Nazshaar and Cruor, fighting to see who gets to go to the other continent first.

The battle of Lariks Point is the first battle of the war, and thus far the longest battle das Kaiserreich has ever fought. Dragging on for several months now, since the beginning of Fentuary, das Kaiserreich soldiers and local militias have been fighting Lionheart forces and keeping them from taking the area. It is initially a siege at first, however the siege is broken quick.

The Battle of Friedstadt started when three Lionheart gliders had been spotted near the village, and das Kaiserreich air forces respond to them, beginning a massive dogfight in the skies that damages much of the village.

After much waiting and diverting enemy ships away from the Lionheart Fleet north of Nashuko, the fleet came into contact with the Nashuko Isles and the invasion had begun, being Lionheart's first attempt to take land from the continent of Cruor during the war. Forces landed in Nashuko City as well, and a hellish fight had broken out.

The Battle of the Kharidian Sea

As das Kaiserreich had pulled out of Gielinor, two Cruorian warships headed sailed for Nazshaar and three ships from the Central Sea had sailed for Port Kharidia. As the two fleets moved towards each other, Admiral McIntlock decided to send support to the outnumbered Cruorian warships and sail for the Lionheart fleet with the D.K.S. Gonzo.

Now with Lariks Point and the area around it secure, Echo Company had been tasked to lead an invasion force for the village of Jeguft. After Lionheartian scouts reported an incoming force, Lionheartian soldiers had set up two palisade walls in preparation for what would be one of the most intense battles of the war.

The Battle of the Treklon Forest

As the battle of the Treklon Mountains had begun, A.L.A Loki and A.L.A. Vesturiel had been set to be sent home on the night the battle was brewing. With a squad of about twenty, the two trekked the forest as they were ambushed by several Lionheartians.

The Battle of Hauptsitz

As the war continued to drag on, Lionheart had launched an all out assault on das Kaiserreich with a huge invasion, 4,000 men strong. A fourth of those forces went right into Hauptsitz, and a battle that could end the war had begun with a beach invasion.

The Battle of the Nashuko Sea

The Battle of the Grand City

The Battle of Fort Versaius

The Battle of the Treklon Mountains

The Battle of the Cruor Mountains

The Battle of the Treklarian Plains

The Battle of Lionheart

Photo's of stuff in the war! 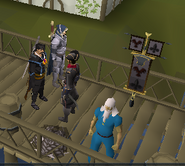 Retrieved from "https://rsroleplay.fandom.com/wiki/Cruor-Lionheart_War_II?oldid=143398"
Community content is available under CC-BY-SA unless otherwise noted.