Chris Aren was created by Liam the Big. He is the charismatic patriarch of The Aren Family,  and he once held the title of Grandmaster of House Aren, now sitting on the Aren Council. He is far older than he seems to be, and has years of magical experience. To any who have merely heard of him, he should be known as a man who has worked almost to death trying to make Kandarin a better place, having served four seperate monarchs faithfully.

The Aren Curse is something every Aren has. An Aren may have one, or even two curses. It is uncertain how many curses an Aren can actually have. Chris was cursed with a single curse:

To be added soon

In Christopher's years, he has gained several different abilities of varying mastery, all of which have assisted him in someway shape or form over his long years. Many of them are not public knowledge, and even still his close family may not know the full extent of his power.

In his youth, perhaps Christopher was a model of physical health. Now however, he is old, and far more sluggish than his youthful counterpart. Currently, Christopher's physical capabilities are as follows:

Christopher's mental capabilities are not to be trifled with. The man's ability with memory and logical reasoning are enough for him to win several awards, if they existed. Among his cerebral feats are:

Being of Aren blood, it is notable that Christopher is highly versed in several magical arts. Having studied most of his natural life in said arts has left him with varying degrees of mastery in many of the arcane arts.

Among his studies, Christopher focused on the Elemental schools of magic the most, finding his niche within the school of pyromancy. Although a pyromancer, he was mildly versed in the other elements, as was expected of him. Like with most wide ranging schools, he has varying degrees of expertise in the four separate elements.

While known world wide as an art of darkness and agent of chaos, Christopher is not only a secret practitioner of Necromancy, but he utilizes it in only a defensive manner, against fellow necromancers. His abilities are limited, as he did not wish to succumb to the frequent insanity associated with the foul art.

The personal magical arts of the Aren family, passed down through the generations since their creation by Galethorn Aren in the Third Age. Christopher studied them under the tutoring of Archmage Grest of Brickforce Tower. He has varying degree of expertise in the different tiers of the almost lost art, however has yet to master the final tier.

In addition to his physical, mental, and magical abilities, he also has an assortment of abilities and skills that don't really fit into any category.

Christopher Henry Joeseph Micheal Aren is the first son born of Ignitus Aren. He was born within Aspera tower, located in Asgarnia. Being the first born son of the Grandmaster meant that someday, he too would carry the title. His childhood was spent learning what all Aren children were expected to learn, to be able to cast spells proficiently  by the age of 12. Nothing incredibly remarkable happened to Chris during his childhood, save for his constant torment at the hands of his sister, Beatrice.

When Aren children come of age, they are sent away from home, to recieve an education past what their parents are expected to give them. Christopher was sent to one of the most difficult of the Aren schools. Brickforce Tower. Nestled in the Kandarin forests, shoulder to shoulder with a mountain. This building was  a place for Aren children, and Aren affiliates, to learn all manner of arcane arts, under the eternal, and watchful, eye of Mallik Grest, the immortal Aren master.

As a young man, Christopher was presented to Mallik Grest by his father, Ignitus. Mallik was a tall man, and one loyal to Christopher's noble house. His first words to the boy was an echo of Christopher's own future. "I will not treat you with respect. I will not baby you or cater to you. You are but a worm....that is, until you prove to me you are a dragon." It was then, Christopher decided that one day, he would prove to Mallik he was a dragon.

Brickforce Tower was a place riddled with shadows and tricks. The books defaced and littered with the words of past students, words of secrecy and lies. Christopher, much like the others in the Tower, were exposed to Mallik's harsh methods, and his harsh training, including several documented 'accidents' leading to the deaths of several of Chris' classmates and friends. Christopher would soon learn the Brickforce Law. If you were able to be killed, you deserved death.

On the first day of official training, a young Christopher was greeted with a smile. A fellow student. A young man, blonde of hair and blue of eye. His name was Brendan. Brendan Stone. Brendan and the young Grandmaster to be would grow to be closest of friends, the two doing their best to protect each other from the terrible chaos that was Brickforce Tower. Students butchered in the halls, teachers poisoned by rivals. When Christopher asked Aren Archmage Grest why this was allowed to flourish, why such chaos was given a place to take root, he had only one answer. "The family, your family, requires weapons to use against their enemies. I am a weapon smith, and this tower is my forge. Now, get back to your studies, and be carfeul. It is a dangerous world out there." Mallik said with a wicked grin. Christopher did not enjoy Mallik's smile.

As his training progressed, Christopher was eventually forced to take life. A man named Denny, who tried to stab him in his sleep. A woman named Claire, who attempted to trap Chris in spell so she could experiment on him. Eventually, the bodies started to pile up. Christopher began to grow paranoid. Mallik's wicked grin seemed to be burned into Chris' mind, the tests and struggles growing as time progressed. By his fifth year, Chris had caused the deaths of 3 dozen people, in defence or otherwise. By year eight, he had developed an apathy about those who attacked him, killing them in bruta and slow manners at times. The game, or so Chris called it, grew exponentionally eaiser, and fun to engage in. The political planning of the deaths of his rivals, it secretly thrilled him. He could never accept that however, never saying a word of his love of the game.Brendan was Christopher's last beacon of some semblence of hope. Some form of humanity. The last bit of tempering to the steel that was the weapon Christopher Aren, and Mallik knew.

A father I am

A sprinkle of madness

Returning to the Family

Give a prince a book

Chris has been described as cold, calculating, and sometimes heartless. His training under Mallik Grest gifted him with an ability to do horrid things, without a second thought. Along with a damaged soul, he no longer actually feels certain things, including physical warmth, or emotional warmth. He is openly cheery, however a quick mind could see his real feelings when he talks, often degrading those he speaks to. Although born in Asgarnia, he sees the the Asgarnian people as lesser. He is both a Kandar Loyalist, and an Aren Purist. He does not have an ice cold heart, however, as seen with his almost adoption of Galastus Grey, and his guiding of Thea Aren. This is only a want to feel, as he is incapable of actually feeling these things. He constantly lives in his memories of being able to feel. While he often has alterior motives for almost anything he does, much of what he does benefits all around him, so long as they first benefit him. 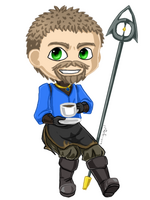 Chris Aren, as drawn by the user Ladymomo. 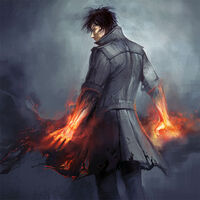 Christopher, almost a man, now cold and calculating, due to Master Grest's teachings and training.

Christoper shortly after taking office from his father. This would be the beginning of the reign of Christopher Aren, Grandmaster. 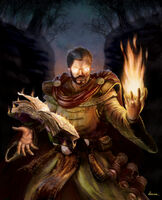 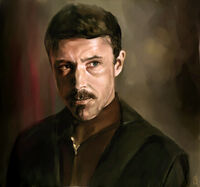 A portrait of Christopher Aren
Add a photo to this gallery

Retrieved from "https://rsroleplay.fandom.com/wiki/Chris_Aren?oldid=128248"
Community content is available under CC-BY-SA unless otherwise noted.