Start a Wiki
Chra'tiv is the ancient leader of the Sanskriit-Mah tribe on Freneskae. She was created as a background / boss character and has never seen active play.

Part of an early generation of Mah's children, Chra'Tiv has resided on the desolate realm of Freneskae for several millennia, overseeing the Sanskriit-Mah and their activities. Created eons ago- according to her, by Mah herself,- Chra'tiv has gathered vast resources of power and knowledge which she restrictively distributes among those who gather the courage to meet her.

Along with the rest of the Sanskriit-Mah tribe, Chra'tiv has faded from the Dream of Mahs' memory to the extent where she is only remembered by rare tribal elders, who often disregard her as a myth- similar to the Muspah. With the Muspah's reentry to the world, tales of her may have gained new life.

Watch this space; history under construction.

The status and age that constitute so much of Chra'tiv's presence are clearly marked in how she appears. She has the ability to seem as anything between highly intimidating and inconsequential enough to be overseen completely. She also takes great care of shaping her environment to further influence the impression on those who lay eyes upon her.

Often, when one first enters the cave where she resides, the impression given will be that the cave is empty. As your eyes adjust to the murky darkness, the towering bulk of her frame seems to fill every last bit of the available space.

Outside the cave, Chra'tiv can seem much less impressive as she is dwarfed by her environment. However, the way she moves through the various obstructions and lethal traps give her an air of superiority matched by few on Freneskae. 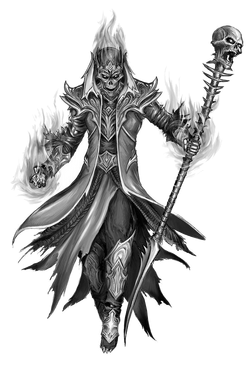 Not much is revealed about Chra'tiv's full potential. Abilities she has demonstrated include

In the relative safety of her cave, Chra'tiv can be found as a slow thinker who can and will internally debate any problem presented to her for hours, or even days at a time. She is calm, collected and often referred to as incredibly wise.

Outside the cave, where the environment fights to end her life every second, Chra'tiv displays a far greater resourcefulness in quick thinking and problem solution. Here, she can be aggressive, irascible and bad-tempered with a dangerous inclination to murder.

Retrieved from "https://rsroleplay.fandom.com/wiki/Chra%27tiv?oldid=157785"
Community content is available under CC-BY-SA unless otherwise noted.