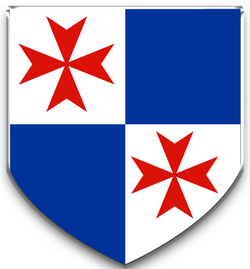 The Anjou were a noble house based in Northern Kandarin. Their crest was two Maltese crosses on a checkered blue and white shield. The Anjou were banished and hunted to extinction in the early Sixth Age due to traitorous acts.

Lands and Members of the House

History (To be expanded)

The Anjou were formed by Galastus Grey as a minor noble family in Kandarin. King Vectis Vekon sponsered the house and they were legal. Corvus Grey, Galastus' brother, joined the house and it grew in prominence as the members were reputed warriors and all led provinces. When the Anjou were betrayed by Cralix Praven, they were hunted to extinction with the exception of Corvus Anjou, Galastus Anjou and Vinae Anjou, who is missing. They made a rebellion against the Crown but Corvus betrayed and Galastus was killed. Corvus kept the last name but claims no titles of nobility nor his former lands.