Cai Grisial Cerddor (Born 26 Septober, Year 1992, Fourth Age) is a crystal singer and musician. He used to own and manage the Lumbridge General Store, before the Battle of Lumbridge occurred. He recently went on a tour with fellow musician Rugnold Pon. His father is an archer for Lletya's military force and his mother is a crystal singer. He is roleplayed by Howdia.

Infancy in the Fourth Age

Cai Grisial Cerddor was born in Lletya, Tirranwn on the 26th of Septober in the Year 1992 of the Fourth Age. He was the first of two children that his parents had together during an affair that they had for three years. His father was an archer, formerly in the military of King Baxtorian's kingdom, who had survived the Battle of Prifddinas and the Isafdar Conflicts, and then began serving in Lletya's military force. His mother was a young musician, descended from the Ithell clan, who had the gift of crystal singing, and made her living by selling crystal singing services, and holding street performances as a singer and musician, hoping for donations from elves who walked by. When he was two years old, his mother gave birth to his younger sister, Anwen. In his early childhood, he was exposed to both Elven and Commonspeak, so he ended up becoming fluent in both languages. After the affair ended, Cai's parents negotiated sharing custody of the two children they had together

Life in the Fifth Age

Discovery of His Gift

When Cai was 15 years old, he began showing a pleasure for singing. One day, when at his mother's home, his mother left a crystal seed on a small table. When she wasn't in the room, Cai walked over to it and began singing in a way that began to shape the crystal. His mother came back into the room to find that the crystal seed was morphing to Cai's singing. After that event, Cai's mother began to regularly give him crystal singing lessons, along with the music lessons that she was already starting to give him, whenever she had him, to help him learn how to control what shapes the crystal morphs into. He is the only child out of the four that his mother has (Two of them would be from other affairs that his mother had) to have that gift. To this day, Cai continues to use this crystal seed for his bow and any instruments he desires to morph it into.

When Cai was 38 years old, his father decided that it was time to begin teaching archery to Cai. Since he was still working on developing his crystal singing gift, his mother sang his crystal seed into a bow for him. His father began regularly giving Cai archery lessons whenever he had him.

When Cai was 138 years old, he decided that it was time for him to begin saving up money for when he would want to live on his own. He got a job as a shop assistant at a general store in Lletya.

At the beginning of the Sixth Age, at the age of 178, Cai decided that it was time for him to leave home with his possessions and money that he accumulated with 40 years of work to look for somewhere to live on his own.

He had desired to see the world for his whole life, having never left Lletya because his parents didn't want him to get killed by Lord Iorwerth's army, so he traveled to Port Tyras with all of his possessions and money, managing to avoid getting attacked, and took a ship to Port Sarim. Once he got to Port Sarim, he traveled to Lumbridge, and decided that there was the place that he wanted to settle down at, because of the mild climate. Since the general store was for sale, and he had 40 years of experience with working in a general store, he purchased it and began managing it. This did not last for long, however, because soon after was the arrival of Saradomin and Zamorak to the unfortunate city. Cai later wrote a song about this event, called Floating Ball, which he sung on the tour he later had with Rugnold Pon. During the Battle of Lumbridge, Cai stayed at his mother's home in Lletya.

While Cai lived in Lumbridge, he often made trips up the river to Misthalin's grand capital, Varrock. One day, he visited the museum and took a tour with a couple other adventurers by the names of Captain Erin Ture and Melanie Page. They learned about a recently discovered statue and plaque held in the Varrock Museum. The plaque held the description: "My life is not worth living without my beloved, and so I freeze myself, remembering what that bastard did to us. I cannot live when my mind is clouded with grief, sorrow and confusion. So I keep myself here with Gindil, in the hopes we shall meet again, in the Kingdom Of Saradomin."

They learned that this statue was found near the entrance to the Ancient Sewers. They decided to attempt the adventure of going into the sewers to retrieve the Frozen One. They faced many trials and puzzles, such as using archery to light the path, battling an elemental witch and freeing the spirit of Gindil, before they finally came across the Frozen One. She gave them each a gift as a reward for finding her, and told them Saradomin had called her to aid in the Battle of Lumbridge, to fight once again as a General. Cai was given a fourth of a large amount of arrows that Saradomin had given to Skyscra to commemorate her rank as a General, one of the elite few who commanded the Army of Saradomin.

While Cai was on a trip to Falador, he went to the park to take a walk while he practiced his singing. Meanwhile, a bard named Rugnold Pon was walking nearby when Cai sang a resonant note in his whistle register. This caught Rugnold's attention, as he had yet to be able to sing in that register. They introduced themselves to each other, and Rugnold told Cai about a world concert tour that he was about to do, and invited him to join his tour, which Cai accepted. These concerts included venues such as Falador Park, Witchaven, Al Kharid, and even the lobby of Ardougne Castle, where they performed for the king. After the tour, Cai and Rugnold parted ways.

Cai currently spends most of his time in Lletya, living at his mother's home, when he's not making small trips to various places in the world that he wants to see. He wishes to find a new city to settle down in and take up a real job to support himself while he pursues his dream of becoming a famous singer and musician.

Cai has a height of 6'0" (1.83 m), and a weight of 130 pounds (59 kg). His body has an ectomorphic structure. He has all the physical features that the average elf has, such as pointy ears. His skin appears to have a slightly tan skin color. He has light brown hair, the color of wood from an oak tree, that he wears in spikes parted to the side, at a length short for an elf. His eyes are blue, appearing to be bright compared to his hair. He has an Elvish accent, and his voice is low, having already deepened. He has the voice type of a baritone, and has a vocal range going from D2 to A4 in his chest voice. As a result of his ability to produce pitches of the right frequencies to shape crystal, he also has the ability to sing in the whistle register; this register of his voice has a range of A5 to C#7. His personality is a mix of introverted and extroverted; he likes to be social and talk with people, but he also needs some time alone. He loves to perform for people, even if it is a small crowd. Along with this, he is adventurous, and finds pleasure in seeing new places.

This section will be for the picture gallery and other media on this page.

A basic portrait of Cai. 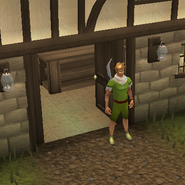 Cai in front of the general store he owned for a short amount of time. 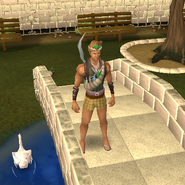 Cai exploring the forests of Tirannwn, near his hometown of Lletya.
Add a photo to this gallery

Cai's theme song is The Next Big Thing by FM Static. One of Cai's dreams as a singer and a musician is to become the next big thing in Gielinorian music. This song reflects some of these wishes that Cai has for his music career, along with how uncertain he is about where exactly he'll go as he pursues his dream to be Gielinor's next big thing.

The directory of Cai's original songs can be found here.

Here will be where quotes from Cai that Howdia feels are worthy of mention will be recorded, whether it's because they're from funny moments, significant moments, or anything else.

Retrieved from "https://rsroleplay.fandom.com/wiki/Cai_Grisial_Cerddor?oldid=120868"
Community content is available under CC-BY-SA unless otherwise noted.