Asurja Val (pronounced ah-SURR-zha), sometimes known by her nickname Surj (surge), is the half-Mahjarrat daughter of Gwyn Val and the Mahjarrat Vixxox. At present, she is an adolescent, 16 years of age, and she has already been almost all across the known map.

Though she was concieved while her parents were enthroned in Ardougne and she is technically a princess of the Val monarchy in Kandarin, she was born in Shilo Village after the couple abdicated. Since then, she has also lived with her mother in Varrock and her father in may places, including Ardougne. The only corners of the known world she has not travelled are Tirranwn, the Fremennik Isles, Morytania, and the Eastern Islands. Asurja aligns most closely at this point in her life as a neutral good character.

Asurja is a young, impassioned firecracker who will almost always choose excitement over safety. Even as a toddler, she was curious and rarely took interest in caution; her attitude has an impishly rebellious element to it, revealing the influence of her mother Gwyn. Asurja is the type to charge head first through a dungeon, fight her way through first and ask questions later. She is not the type to carefully inspect clues first. On the flip side of this, it also makes her a hothead sometimes. She can be very patient when calm, but under stress she can become very difficult and defensive.

Though her mother passed on a great deal of vigor, Asurja was still very impressionable when she was sent to live with and learn from her father. She came to understand that working hard takes effort - she was exposed to training and routine by her Greyson. His instruction with magic was emphasized in a way that will stick with her for a lifetime.

Morally, Asurja is somewhat different from both her parents. She is very patient and understanding of peoples' lifestyles. While she will still freely announce, "You're blue, that's weird," to a stranger, she was taught early on not to believe in a black-and-white world. She understands that "good" and "evil" are almost always more complicated than they seem. She believes a great deal in "fairness," and often has trouble accepting that there isn't always a solution that can make everyone happy.

Asurja, as is to be expected, has features that cross between her parents'. She inherited her mother's flaxen hair, up-turned nose, and pointed chin. From her father, she was given a strong, defined jaw, blue-grey irises, and unseen pupils. Additionally, as a half-Mahjarrat, Asurja's skin has a lavendar hue and her face marks her race with beige Mahjarrat markings on her face, black sclera, and three onyx-like gemstones on her forehead.

As a mid-pubescent adolescent, Asurja is about halfway through her growth into a woman, but is still clearly not a matured adult. She is five feet tall and skinny as a rail. Her hips and bust are filling in, but are not totally developed yet. 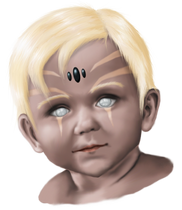 Asurja as a toddler, in her first year

Asurja as a child, around age 9

Asurja as an adolescent, in her teens 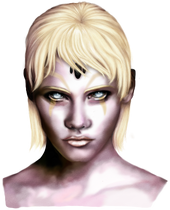 Asurja's appearance once she has fully matured into her adult body 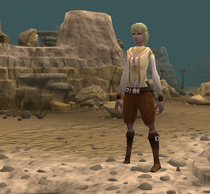 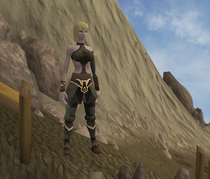 From birth until age 2.5, Asurja lives in the deep jungles of Karamja. She was born in a small native settlement near Shilo Village and raised by her mother, Gwyn, who served the tribes of the jungle as a talented hunter and trader. Asurja was revered as a local fascination and sometimes even a spiritual child because of her strange skin, but the community was always loving and she was never rejected as a demon or creature of evil.

Even as an infant, Asurja was clearly magical. Much in the way a small child awkwardly and slowly learns how to use his hands - some of the most advanced and delicate tools that will ever be at his disposal - so, too, did the baby grapple with her natural access to magical energies and auras surrouding her. Before she had any grasp on her abilities with magic, or even had any idea what magic was, it was common for pebbles or droplets of water to sporadically fling through the air around her (and often accidentally hit a bystander). Occasionally, she even seemed to play with this phenomenon.

Gwyn often took her daughter out into the jungle with her when she hunted. The child seemed to glee at the adventures even before she could clearly express herself, and she even seemed to hold her own. According to her mother, Asurja was left alone for a few moments out in the trees one day, and when her mother returned, she discovered her daughter was being attacked by a snake. Before Gwyn could take action, though, a little pebble rocketted through the air and cracked against the snake's skull, leaving it dead. Gwyn never worried about her daughter in the jungle again.

When her mother didn't take her out into the wilderness, Asurja stayed in the village with her nursemaid, a middle-aged tribeswoman named Sanyu. She was constantly cared for, and often preached to about the spirits that watched over the peoples of karamja, told folk stories from the island culture. Asurja came to love storytelling more than almost any other part of her day.

Asurja didn't meet her father for the first time until she was nearly two years old; he didn't know that Gwyn had birthed him a daughter and learned by surprise when he sought out his wife in the jungle one night. However, at such a young age, it didn't mean much to her. As time passed, she knew she had met her father and that he occasionally visited. It was only on occasion that she wondered why her father didn't live in the tribe with them, and when she asked, she was told that her father was an important man who lots of people needed in lots of places.

When she was coming close to age three, hardship struck the settlement she and her mother lived in. They picked up and moved away from the jungle to Varrock, an urban city that was very different from everything Asurja was used to.

Adjusting to a contemporary mainland lifestyle was jarring, but Asurja took it in stride. She was settled into a small house with her mother, who quickly grabbed employment from the city, and she became Gwyn's constant companion. They would rise early together to head to the training gym where Gwyn would drill new soldiers and guide them through sparring and exercising programs. Asurja would watch and play with the haystacks in the corner, sometimes swing on the sparring dummies or tease the stray dogs that lived in the area. After a long day of work, they would go home and Gwyn would read to Asurja. It was soon that she started learning to read letters and words herself, though she still preferred just to listen to a story. Occasionally, Gwyn would let her daughter play with children in the streets, but never in the slums, and never with any child who teased her for her skin color.

As Asurja started growing up, so too did her sporadic magical outbursts. Little whizzing pebbles turned into rocks and dead rats and spilled water, but worst of all were the sparks. Occasionally, a stray spark in the wrong place would catch a bale of hay or some tinder on the ground, and a fire would start. Gwyn began to worry for her daughter's safety again, afraid that she would be away one night and the house would burn down with Asurja in it. Gwyn knew that it couldn't go on like that; the child had to learn to control magic if she was ever going to be safe from herself, but as a mother she relented that she couldn't help. Asurja's mother had never cast a single spell, nevermind could she teach a young Mahjarrat how to interface with magical forces.

Asurja was almost five when Gwyn explained to her that Asurja was going to go away with her daddy. She promised that they would visit, and they would on occasion, but when Greyson came to town one day, Asurja was whisked off to the other side of the continent, to Ardougne.

Retrieved from "https://rsroleplay.fandom.com/wiki/Asurja_Val?oldid=141719"
Community content is available under CC-BY-SA unless otherwise noted.