Asgarnian ale is a popular brown ale typically served throughout the kingdom of Asgarnia, and most especially in the capital city of Falador. Asgarnian ale is typically known as being one of the most widely consumed drinks within Gielinor due to its fair price and ideal quality and taste. Almost as old as the Kingdom of Asgarnia itself, Asgarnian ale is known for its popularity amongst peasantry, middle class, nobility, and even royalty. The drink can be found in almost every pub or restaurant within Asgarnia and amongst private vendors. Aside from Asgarnia, the ale is also popular in the Dwarven city of Keldagrim - the only location outside of Asgarnia which it is brewed commercially.

Asgarnian ale is richly present throughout the history of Asgarnia. It is said to have been created by the original brewer who founded the popular pub The Rising Sun Inn. The ale soon became the most famous drink within the kingdom, making it a popular item for tax income and trade. Almost every household had their own stock of the ale. Consumers drank it like water, vastly increasing the income and popularity of the Rising Sun Inn.

Soon, other brewers bought the recipe to the ale and made their own variations to it, such as the Dwarven favorite Asgoldian ale. The ale soon began to be served in other locations such as Taverley. The famous Falador Party Room also began exclusively serving Asgarnian ale, drawing in tourists from all over Gielinor.

Asgarnian ale is known to have been the favorite of many Asgarnians, such as King Vallance, Sir Amik Varze and the White Knights, Lord Dion Magnan, and plenty of others.

The main articles of most Asgarnian ale recipes remains constant. However, different distributors tend to use various amounts of other ingredients in small amounts, as well as varying amounts of base ingredients.

The main ingredients in Asgarnian ale include:

Before the War of 164, Asgarnian ale was popular in bottles. Mainly sold in general stores, bottled Asgarnian ale become quite popular amongst travelers passing through the kingdom, as well as in trading caravans. While in bottles, Asgarnian ale became much more popular within foreign kingdoms such as Misthalin and Kandarin. This severely lessened the value of the ale in trade and, as a result, Asgarnia saw much less tourism for the drink.

The drink began to pop up in bottles throughout other general stores and bars all across Gielinor. With the option of available refills at a much lesser cost, ale enthusiasts no longer saw cause to travel to Falador for the drink.

After 164, bottling of the beverage was put to a halt due the lack of glass material from the war effort. As a result, the rest of Gielinor saw a heavy decrease in the distribution of bottled Asgarnian ale, causing them to once again travel to Falador to seek out the prized ale. The economy of Asgarnia was once again saved by their famous ale. Due to this, the beverage was no longer sold in bottles ever again since the war. Bottles of Asgarnian ale are prized amongst collectors, as very few are known to be left in existence.

Asgarnian ale is arguably the most consumed and produced alcoholic product in Gielinor following behind standard beer. Asgarnian ale is most commonly sold in pint-sized glasses in bars such as The Rising Sun Inn.

Aside from pint glasses, the ale is also sold by the keg and by the barrel. Asgarnian ale was once sold in bottles as well.

The Rising Sun Inn is the leading seller of Asgarnian ale. Located in western Falador, it offers the ale exclusively by the pint at prices of three gold pieces each. Along with the Asgarnian ale, The Rising Sun also sells lesser known beverages such as Wizard Mind Bombs and Dwarven Stouts. 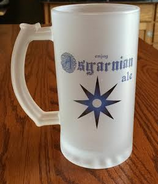 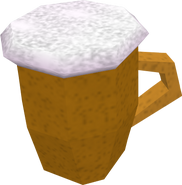 A glass of Asgarnian ale
Add a photo to this gallery

Retrieved from "https://rsroleplay.fandom.com/wiki/Asgarnian_Ale?oldid=132639"
Community content is available under CC-BY-SA unless otherwise noted.