Start a Wiki
The Anima Malum is an aberration of the Anima Mundi, sealed in three sacred clay masks.

The Anima Malum's main presence is in the Wilderness, where it first took root and produced an ecosystem simply called the Forinthry Forest. The barren earth has been revitalized with terra preta and a mycorrhizal network. Though mostly a place of nature, some artificial structures can be found, such as stone circles and summoning obelisks. In the center of the forest is a hill. Atop it is a grand tree, and on its sides are entrances to a cavern with large fungal platforms residing on the walls.

Its invasive nature brings it to target isolated areas for restoration or conversion, such as underwater and islands.

In order to control sentient creatures, weaker replicas of the original sacred clay masks are mass-produced. The masks have the power to charm, persuading those nearby to wear them. Once this is done, the mask fuses to the face of the wearer and replaces their sense of sight and smell. The mask also allows the passage of oxygen and nourishment.

The puppet vine is a parasitic species that takes root in a body and controls its movement. The vine can attack by releasing tendrils and thorns from the body. The vine lives in a symbiotic relationship with a parasitic fungus that provides the body with an external cover, protecting it from the elements, sealing in the scent of rot, and providing the puppet with infectious spores as another means of attack.

Derived from polypore sticks, these ents grow cores similar to staff orbs. The cores start off blank, requiring the transfer of energy from a fire orb before they can cast magic. Once their core is charged, they can cast powerful spells beyond the strength of a polypore strike.

Amorphous masses of living minerals and moss, capable of concentrating their minerals to the point of solidity. They can use this ability to extinguish fire and entrap their victims. 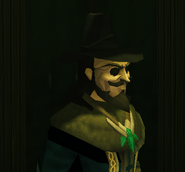 The appearance of a humanoid converted by one of the original masks, who refers to themself as Smilax.

Most converted humanoids are controlled by mass-produced masks and become druids.

The colors of a converted magic tree.
Add a photo to this gallery
Retrieved from "https://rsroleplay.fandom.com/wiki/Anima_Malum?oldid=157003"
Community content is available under CC-BY-SA unless otherwise noted.