Alexander Alucard Marcus Hellsonge Drakan Draculea (Pronounced al-ecks-an-dur al-oo-card mar-kuss hell-sone-eh drakk-an drac-you-la) is a male vampyre character. Alucard's age is said to be 18,576 which would explain his arrogance in regard to power and knowledge. Alucard's past, before gielinor, is unkown even to his closest family and friends.

Years after the creation of Gielinor, a day or two after the arrival of Lord Lowerniel Vergidiyad Drakan, Alucard traveled into the realm with the rest of the Drakan. He was simply the nephew of Lord Drakan. Having been only fresh and new to the plane of Gielinor, this new, fresh life was only a couple of days to a week at most. Alucard's uncle, Lowernial, had arranged a meeting with Lord Zaros to forge their alliance, which would change this new world forever for the Drakan Coven. Alucard often accompanied his uncle to meetings with Zaros and other events. Along with these things Alucard had become fond of Zaros and made it a point to get closer, and perhaps be useful to Lord Zaros.

In the early morning of Caistleday upon the second week since the Alucard's arrival, his uncle Lowerniel was sent on his first campaign, leaving Alucard within the walls of Zaros's castle in Senntisten. Alucard was in his coven's quarters when one of the many servants of Zaros, a demon, arrived to inform Alucard that Lord Zaros wanted to see him in his throne room. Alucard followed the demon down the halls, passing one hall that had Zamorak and Khazard standing in it. They seemed odd as they spoke in secrecy. He arrived at the throne room, the demon left Alucard and others to converse with the shadows Zaros. This chat that accured between Alucard and Zaros, amongost the others, was the start to his new role of being one of Zaros' handful of assassins. This role was a great accomplishment and start to Alucard's goal. After their meeting, Alucard returned to their quarters where he had come to see his father, Lestat, and his brother, Ora, going through battle plans on maps of the regions. Throughout the rest of the age, Alucard did his part in aiding the growth of Zaros' empire; he was given many odd jobs and assassination missions. During that time Alucard had began to suspect something of his Uncle and the other generals. A week before the assassination of Lord Zaros, Alucard was sent on a "Special Mission" by his uncle. Because he was losing trust in his uncle, Alucard decided to stay at the castle and spy, rather than leave. Sadly, they were only discussing battle plans.

It was the day of the assassination, the war had come to the castle and everything was total chaos. As history has been told, Zamorak had led the rebellion to the throne room, the generals attacking Zaros's body guards as Zamorak began to attack Zaros. Alucard was in his quarters when this happened, and charged to the sound of battle, but by the time he opened the throne room doors, it was too late. Zamorak was impaled along with Zaros on the staff of Armadyl. Alucard was enraged and had gone into a mad spree of anger. He attacked the closest general, Khazard, and knocked him out, but the rest of the generals took hold of Alucard and brought him to his knees. Drakan approached Alucard, slapping him across the face, and ordered him to be locked away in the castle dungeon.

Alucard was knocked out and locked in a metal coffin in the castle dungeon. Hours, or perhaps days - Alucard wasn't sure - had passed before Lestat found Alucard and broke him free. Alucard left with his brothers, his two sisters, and his father and mother. They went into hiding for the next few following weeks

The third age had begun and Zamorak had returned. With Zamorak's return, Lowerniel had come to his side. Knowing that he would be useless without House Drakan, Lowerniel called to his Family, which included Ranis, Victor, Vanescula, Alucard, Lestat, Natas, Ora, and a number of others. As much as Alucard had not wanted to aid his uncle, or even follow Zamorak, he agreed. His grandfather, Vladiyad, (Lowerniel was Alucard's great uncle) had no problems with it at the time, as he was a heartles creature just like his brother. With Zaros banished, the few left of his followers had done their best to keep Zaros's land under Zaros's name, but knowing The Empty Lord was gone, most of the other racial factions and religious groups began to hoard the land that was once Zaros's. Alucard was surprised to find his uncle had a large military under his control, not expecting such power from him after the betrayal. House Drakan, along with the military forces they controlled, had gone into battle day after day fighting to take over and gain power in Gielinor. After many months of war and battle, it came time for Lowerniel to claim the land promised to him by Zamorak, Hallowvale. Drakan entered the Hallowland through Silvarea. Following him were many vampyres, including House Drakan, many other races, and a massive amount of Zamorakian followers. Upon their first arrival into Hallowland, they came to Kharyrll, only to find it was already conquered by werewolves. Of course that would not stop Lowerniel, and they continued their campaign of destruction and control. Through the conquered settlement of Kharyrll, otherwise at the timed name by the werewolfs, Lowerniel convinced the werewolf settlement to aid him, which began their alliance and part in the fall of hallowvale.

Alucard stands to a full 6'7 In his humanoid form, which is obviously a bit tall even for a Vampyre. His flesh is snowwy white, and smooth, his lips a paleish grey. His eyes are a Blueish-Ultraviolet color, and his pupils are thin black slits. His fangs row up in a double K9 Placement, The longer inner pair of fangs fade from pearly white into a jet black at the tips, His tongue is a dark grey color and seemed to be split. Alucards hair is a medium long with layers, It naturally being white, But odd tips being black. Alucard is very built in muscle mass, which he keeps in top shape. His right hand has a scar of a branded Zamorakian symbol burnt into it, his right shoulder has the Draculeaian Crest Tattoo'd magically on it, As all Family members of the Draculea too have this. His back has several tattoo's on it of runes, as for the use to use his energy through tham, rather than having to carry around actualy runes. Alucard too has a very rare Disease that is based from Vampyrium, and is called croissanceinite. Due to the croissanceinite, Alucard has grown a second set of wings, giving hi four, and he is stuck with his wings during any form taken, Be it Humanoid or Vampyre.

Alucard upon his Vyre form, (TBC)

For the past few months, Alucard has been keeping to himself and roaming his land in Morytania. Only recently has he risen back into the public's eyes once again, in which he has taken part in the recent attack on Varrock. Of course, he made sure to keep his identity hidden. Since then, he has been in Canifis speaking with his most trusted assassin, Crow Sin'Dothmire.

More recently Alucard has becomed Allied with a Vampyre by the name of Lothorian Foryx, who has become a most trustworthy and close ally. There has risen a threat to the vampyres, or more so an annoyance. They are called, by the vampyres, Paladins: knights who commit their lives to slaying and ridding Morytania of the vampyre inhabitance. Lothorian asked Alucard to aid him in taking back his Port in Eastern Morytania. Alucard agreed and fought side by side with Lothorian, and a few other Foryx. In the end the Paladin's leader, Paladin Sun, was killed. Sadly this did not stop the attacks fo the Paladins.

Upon a rising threat within the Morytanian Community amongst the Vampyre, Lothorian was endangered, And although was more than angered with Lothorian, He had to save him. Alucard had claimed to have killed Lothorian, and put on quite the public display of the act. Using his masterey of Illusion and magic, Alucard had faked Lothorians dead, which he state publically was due to unspoken reasons other than, "Lothorian envoked my wrath, he obivously made that mistake." In truth, Lothorian was banished from Publicity until things had died down, and he was no longer hunted.

The day had come, the Portal in lumbridge forest had been used, Zamorak arrived, and an outburst of energy grew across the masses of Gielinor as Saradomin and Zamorak raged int battle. Upon felling the uprise in energy near the location of the portal, Alucard had to know what came through it, only to Scry and find the two gods fighting. In immediate conern Alucard traveled to Darkmeyer to dicuss the situation with his great grand Aunt, Vanescula. A glimps can be seen of the conversation between the two.

- nearing the end of the discussion Alucard convineced Vanescula it was a bad idea to attempt to aid Zamorak until he'd dealt with the salve, and until promising word from Lowerniel had arrived. She agreed, and those amongst the meeting decided to wait for the proper oppertunity to provide itself. 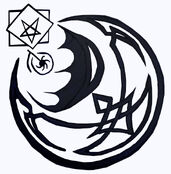 The Crest of the Draculea Coven 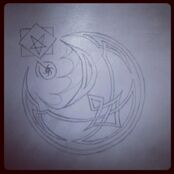 The Draculea "Tattoo"
Add a photo to this gallery
Retrieved from "https://rsroleplay.fandom.com/wiki/Alucard_Draculea?oldid=148591"
Community content is available under CC-BY-SA unless otherwise noted.